It’s been too long since I’ve published a new post because I have been soooo busy, which I guess is good.

A quick note: I know there is a lot of controversy surrounding the production and sale of Foie Gras. I have always gotten my Foie Gras from Hudson Valley Foie Gras whom I am convinced run a humane and responsible operation. I would urge you all to go to their site for more information.

Yessssssssss…The fabled Foie Gras!!! I’ve wanted to make a classic Terrine de Foie Gras for like forever, but I’ve always thought it was too difficult and time consuming. The first time I tried to prepare Foie Gras, I tried searing it and before I knew it, it disapeared in the pan. Then I tried making Foie Gras Tourchons and aging them in goose fat. For the most part they came out pretty good, but I was so freaked out preparing them that it never quite worked out. Back to the drawing board…I ordered my fresh Foie Gras from Hudson Valley.

They arrived while I was camera blocking and I rushed home from the studio to unpack them and put them in the fridge on my lunch break. The last time I tried to deveine some Foie Gras I got a little over heated and didn’t give it enough time to come to room temperature first. This time I soaked the lobes in milk for an hour and a half (this helps draw the blood out I’m told). I rinsed and dried them and started pulling the veins out.

Trying not to totally eviscerate the liver, I gently removed all blood, veins, and sinew I could find. I planned on preparing the Foie Gras two ways. I wanted to confit it and to do a classic terrine. Confit first, I sterilized my jars for the confit.

And stuffed the livers into the jars.

I seasoned them with white pepper, sea salt and a dash of some kick ass Sauterne 86′.

Rrrrrrriiiiiggghhhtttttt??? This is when things started going slightly wrong. I sterilized the jars with the rubber canning rings on…Wrong! Then I was supposed to put the filled jars back in the water and simmer them for just 20 minutes…Lemme just pause to say I started cooking after I came home from a long day of filming around 11 PM. I as really excited, and really tired. By the time I got the filled jars in the water bathe it was past 2 AM. So…I put the jars in the bath and sat down for a nice glass of some of that kick ass Sauterne and quickly fell asleep, but I did remember to set the alarm on my iPhone, so disaster averted…NOT!

I woke up right at twenty minutes and turned the fire off and crawled into bed…As the point was to let the jars cool in the water, and not pull them out or try an cool them too quickly because that would ruin the whole thing. I woke up at dawn and checked the jars. To my horror I hadn’t turned the fire all the way off but turned it all the way down to low! Noooooooooooo!!!!! The Foie Gras was in there but lets just say it was a tad over cooked. So, I started all over again. There are two trains of thought concerning this. One is that if you leave the jars in the water bath they are going to continue cooking while it takes a couple of hours to cool down, or you can remove the jars thus quickening the cooling process. I opted for the second method when I did my redo. The point being that I wanted the Foie Gras to be perfectly cooked. Unlike a terrine you can’t stick a thermometer in the jar to check the temperature. We must wait now until the holidays when I crack open these babies and taste test. 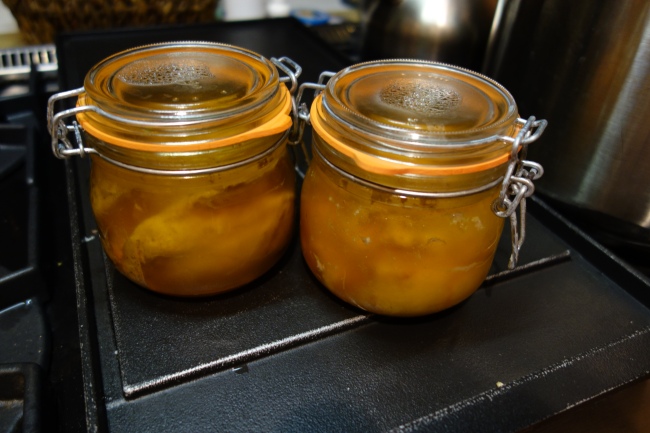 On to the terrine! I took my other cleaned Foie Gras and sprinkled it with sea salt, ground white pepper, and Sauterne and let it marinate for an hour. I then stuffed them into my Terrine.

I placed the terrine in a water bath, and popped it in my preheated oven at 200 degrees. Quick note: I took a folded newspaper and put that at the bottom of the water bath to elevate the terrine and circulate the water. I also heated the water in a tea pot before I added it to the bath. The recipes I studied called for between 30 minutes to an hour and a half cooking time. It took about an hour to get the internal temperature of the Foie Gras to about 120 degrees. The last thing I wanted was to over cook it. I removed the terrine from the oven let it cool on the counter.

You can see a little pink juice in the fat and I was really worried that I’d under cooked it. I weighted it and went to sleep. This time I was hoping I got it right.

THe next morning I removed the weight and stashed it in my fridge to age for a few days.

I removed the terrine from the dish by soaking it in some hot water for a few minutes. I then trimmed the excess fat from the top careful to strain and save it. I have to say this tasted amazing! I served it thinly sliced on a baguette sprinkled with sea salt, Yessssssssssss! So good!

I froze the rest of the terrine in a double freezer bag, and put the confit in the fridge to age until Thanksgiving.

😷 Welp! 🦠
My daughter made her bed this morning...#Yaaaaay. Quarantine’s going great! 👍🏾 😷
Pussy Galore is dead...so sad. 🙏🏾
We wish the prime minister well...🙏🏾 🦠
So, sooooo good! Some of the precious things that are getting me through this quarantine! @SimonWolf_ www.simonwolffcbd.com
Nadia the tiger got tha Ro Ro y’all...😷
%d bloggers like this: