Ramen…So much has been written,  blogged, posted, tweeted and texted about Ramen. I really got lost in all of the million comments posted by the ramen tweakers online just trying to find a good noodle joint when I was in San Francisco recently. I settled on Katana Ya on Geary as it was 2 blocks from where I was staying sooooooo natch! 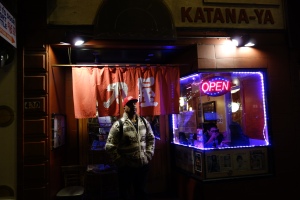 I look so sad, standing there on a chilly night after doing a killer set in SJ…Here’s what I got! This was a very yummy bowl of their, Spicy Roast Pork Ramen!! I decided that since I was going to attempt to make my own Ramen from scratch I needed to sample some. So over the next few days I ate Ramen in San Francisco, Ramen in San Jose, Ramen in Daly City and in all points in between. Each spot had a hype man screaming that this was the best fucking bowl of Ramen in the universe.

Every place was different. Every bowl unique and special in its own way. Kinda like snow flakes. Katana Ya was the spot I kept returning to night after night to try a different type of ramen on their menu. They had the best broth of all the spots I ate at. My fave was the Miso, with roast Pork, thick broth, spicy. After a week of Ramen wood shedding and research I returned to LA ready to make a kick ass Ramen of my own.

Its all about the broth, so on that note…

This is how my broth looked when I first started cooking it.

This is what my broth looked like after 20 hours of simmering and reduction. I put my finished broth in the fridge to chill, and finally went to sleep.

The next day I made my Chashu Pork. Chashu pork is marinated braised pork belly…Perfect for Tonkostu Ramen!

1 whole shallot (split in half with the skin on)

A key item in any decent bowl of Ramen is the Ajitsuke Tamago, or the Japanese marinated soft boiled egg. I wanted to do something special with this so I decided to use a duck egg. Why? Because duck are bigger with richer, creamier yolks than chicken eggs. That wasn’t enough, no I also wanted my egg to be the prefect soft boiled egg, so I put my eggs in my Sous vide for 60 minutes at 166 degrees. This gives you what would call the perfect soft boiled egg. The whites are just set and the yolk is thick and custard creamy!

Next I made my dashi. A Japanese broth made of Kombu seaweed and Bonita shavings that have been briefly simmered and strained.

On day three, I took my broth out of the fridge, and scrapped all of the fat off the top, and set it aside. I then assembled my finishing ingredients. 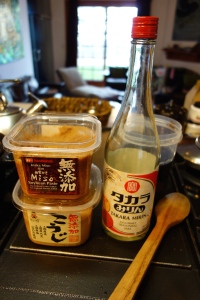 The Final assembly of the ramen is really fun. You’ve done all of the hours of work, so have some fun. I first tempered my broth to get it tasting exactly the way I wanted it. I thinned it first with some dashi. Then I added the miso, to taste. Then I used a bit of my left over Chashu broth and a some pepper to space it up, a dash of. The most amazing flavor combo was the dashi and pork broth. Once I got the broth right. I thin sliced the Chashu pork belly and put the slices under the broiler to crisp them up.

I auditioned a few different noodles, and these were the finalists. The noodles on the left are closer to a fresh Udon noodle that seemed to soften and keep absorbing the broth until they were the size of overfed pond leeches! So, no go. I finally decided on the noodle on the right, a fresh Chinese Pancit noodle. Perfection. These noodles really hold up, and don’t get to soggy once they’re in the bowl. I threw them in some salted boiling water for like a minute tops and they were ready. I put the noodles in the bottom of the bowl and ladled some broth on top. Next I put the rest of my veggies in and it was ramen time Baby!!!!

😷 Welp! 🦠
My daughter made her bed this morning...#Yaaaaay. Quarantine’s going great! 👍🏾 😷
Pussy Galore is dead...so sad. 🙏🏾
We wish the prime minister well...🙏🏾 🦠
So, sooooo good! Some of the precious things that are getting me through this quarantine! @SimonWolf_ www.simonwolffcbd.com
Nadia the tiger got tha Ro Ro y’all...😷
%d bloggers like this: